So, I have an on-again, off-again book club, and one of the books we recently discussed was Lean In by Sheryl Sandberg. She is the woman in that popular TED talk, which exploded into a book/movement to ‘lean in’. 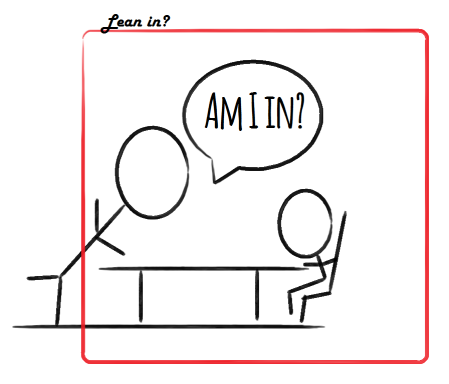 The book is for women in the workplace. Or rather, it’s for women who want to excel/climb the ranks in the workplace. She is essentially looking at why we don’t have more women leaders, and a LOT of that reason, according to Sandberg’s discussion, is about children/family.

That is to say, women anticipate having children, and so they back away from work. There are other aspects, but this point is one that interests me the most. Essentially, she suggests that even before meeting the loves of their lives, women are already planning their exit strategy for motherhood. And therefore, they are less ambitious in their jobs.

Okay, I can get that. In fact, I’ve seen that actually happen.

Now why am I talking about this today? Because I’m curious about leaning in from the perspective of cancer.

Sandberg argues women should lean in so that if they do have kids, when they return from their mat leave they will be in a good position. Focusing on advancing your career is worth it for the places it will take you, and because when you come back  to work you’ll be at a higher level.So, say instead of babies you have a possibly shorter life span on your mind. Are there similarities here? Should we ‘lean in’ and create a legacy of some kind? Does that kind of stuff even matter? Why bother leaning in if the clock is officially ticking? Is the assumption of illness, change, or even death reason enough to not go for a promotion or try to rise up in a company? Better yet, those diagnosed with stage four cancer – are we more likely to lean away?

Maybe it’s a matter of time. But that’s the one massive question that cannot be answered. It could be a year, it could be twenty years, it could be . . .  well, who the heck knows?

I’ve met one woman who choose to lean away. She was counting down the days till retirement and was diagnosed with stage four breast cancer. Instead of retiring, she went on disability as she slid into depression. Somehow, to her, being on disability rather than being retired seems to equate to missing the golden ring. But then, I reckon the depression contributes to that perspective.  She is emotionally disconnected from joy, and that is really crap.

There are other women – younger ladies in the thick of motherhood, diagnosed with stage four and choosing to stay home. They’d rather spend time with their kids, and who is going to argue against that? That makes all kinds of sense to me. They are leaning into what matters most to them.

And then there is me. To lean in or lean away? This past autumn had me leaning in to get the book done and out. It was a very good decision, and what an experience. Also, I worked during that time too, even right after diagnosis when life was nothing but brick walls. Though to be honest, while we build Zsolt’s business I don’t have a choice whether or not to work. I must work. We need to eat and pay rent 🙂 Retirement isn’t an option. Heck, I’m only 31! There is nothing to retire.

But even if I’m working, should I be leaning in? Should I try to grow my career or be content as it is? Is it fair to my employers if I apply & get accepted for a higher position? What if I get sick again, and their investment comes to nothing? Is it selfish to lean in? Do I even want to lean in?

With my book it is different. I like to lean in because it’s just me. Either I sell or I don’t sell. Either I create or I don’t create. No one else is impacted. But even with writing . . . well, there are these scans every few months . . . there is that constant limbo. Life itself is an emotional stop and go.

There’s a point in here somewhere . Actually, no, there isn’t a point. There is a question: Do you lean in, and what does that even mean to you after being diagnosed (or someone you love being diagnosed) with cancer? And if someone told you time was limited, would your career even remain a focus?

What do you think? Leaning in post-cancer, leaning in at stage four . . .

I lean into what I love, that’s for sure. But as for the other stuff, I don’t know. I found myself not committing and using “I had cancer, so I don’t’ want to waste my time on crap that doesn’t matter” as an explanation for that – whether or not it is a good explanation. Honestly, I’d rather write short stories that make people smile. I’d rather capture someone’s story and help them feel special. I’d rather tweet and talk and doodle and create. I’d rather feel my heart get filled up with a job very well done. And most of all, I’d rather weave stories, even if it’s not catapulting me to the top of an organization, or even a bestseller list, it’s what I prefer to do. Now with the stage four, I feel that way even more.

Though as I said, I still need to pay my bills 🙂 And really, my dreams are much bigger than just paying bills. I want to buy property and travel and live well and realize some huge ideas that must involve success. So, despite stage four, and not knowing what the next scan will bring, I actually do want to lean in. I want to lean in on my terms and with what I love.

So that’s a little from me. Now it’s your turn:

Lean in . . . what does that mean after fighting for your life? I’d love to know.

12 thoughts on “Lean In? Sometimes I’d rather Lean Away.”