There are some amazing stories that slip away into the past. But ever since Zsolt’s started digging into our family tree – they just keep popping back up! Today I want to share one of them with  you.

This fellow with the beard is my great-great-great-great grandfather on my father’s side of the family, Antoine Legros dit Lecount (which means, his nick name was ‘Lecount’ – i.e. The Count, a nickname often given to people who were being said to behave in an aristocrat fashion – i.e. overly proud). Antoine was a voyager – he was the man you’d imagine trekking through the pre-Canadian wilderness leading traders, exchanging with first nations, delivering mail between forts, and living off the land. He was contracted by the Hudson Bay Company in exchange for some cash, cotton shirts, shoes, one silk handkerchief and a necklace. 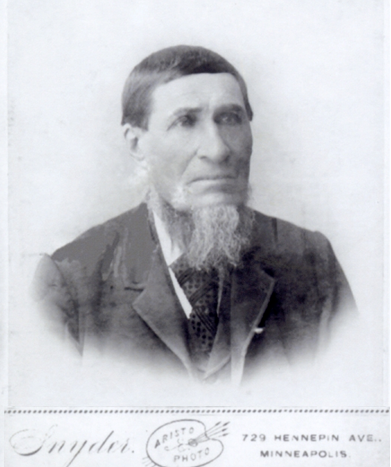 In short, he was really cool.

Unfortunately, his life was cut short with a double barrel shot gun. It sounds horrible – it is horrible. But one thing that nevertheless remains touching is that in the last moments of his life, he saved his son from a paranoia-crazed English man. Here is that story, taken from the original account of witness, James Bruce in 1840, later to be transcribed into Artic Expeditions (1877) by David Murry Smith.

The Murder of Antoine Legros

“James Bruce and Thomas Simpson were hired by Hudson’s Bay Co. to explore and survey along the north coastline of America between the Pacific and Atlantic Oceans.  They were traveling with a large group of Indians and Metis (mixed-blood). The following incident happened in 1840, the third year of the expedition on the Pembina Trail, Dakota Territory.

In early June Bruce and Simpson left the main camp along with Antoine Legros, Sr., Antoine Legros, Jr. and John Bird; the last three were Metis.  The party of five intended to travel ahead of the main body, arriving at St. Peters quickly.

After a few days of travel, Simpson began complaining of feeling unwell and wanted to return to the Red River Colony.  On June 14, Simpson and the other four men turned back.  Simpson was restless and uneasy and commented that he would never recover from his ailment.  The party traveled until an hour and a half past sundown, arriving within a mile of the Turtle River.

The men then began arranging their camp for the night.  All the accessories of prairie travel surrounded them. Their horses were grazing nearby, and a cart for the outfit occupied the center of the camp. All were armed with guns and pistols, for the Sioux were on the warpath. But within themselves were elements more dangerous than the tomahawks of the savages; only two of the five would ever leave that spot again; for three it was their last camping ground.

Bruce, Bird, and the elder Legros began raising the tent.  With his back to Simpson, Bruce heard a gunshot and turning he saw that Simpson had shot Bird, who groaned and fell to dead.  He then saw Simpson turn and shoot Legros who staggered and fell against the camp cart then fell to the ground.

Immediately Bruce and the younger Legros ran a short distance away to where the horses were tied.  Simpson called out to Bruce asking if he was aware of any intention to kill him (Simpson).  Bruce replied he knew of no such intentions.  Then Simpson said he shot Bird and Legros because they intended to murder him in the night for his papers.

The elder Legros, who was still alive, asked Simpson to allow his son to leave unharmed to which Simpson complied.

Simpson then offered Bruce five hundred pounds to go back with him to Red River Colony and “keep the affair secret”.  He then asked Bruce if he knew the way back to Red River.  When Bruce said he did, Simpson gave the order to harness the horses.

The elder Legros now called to his son to come and embrace him one last time.  It was then that Simpson asked Legros if it was true that he and Bird meant to kill him to which the dying man replied, “No”.

All this time the explorer was standing in the middle of the camp with his gun in his hand.  At this time Bruce and Legros Jr. went to the horses, mounted and rode away to the main camp.   Immediately after arriving they gave the alarm, and joined by five men, returned to the scene of the murders.

Bruce found Simpson dead in the cart, shot in the head with his own gun.  In his report, Bruce stated that Simpson did not display symptoms of insanity.  There were no papers found in Simpson’s belongings indicating a reason for the murders.  Another report suggests Simpson had become a ‘madman’.

The three men were moved to the churchyard in Red River Colony where they were interred in the same grave.

The younger Lecount was never asked to give a statement.”

6 thoughts on “The Coolness & Tragic End of Antoine Legros”