There is a movement across England that promotes street parties. These parties are seen as a way to bring communities together (sorta like a twitter party – for instance, the #tellhermovement twitter party on May 5th! Plug alert!), and from what I’ve heard, they work fairly well. One friend of mine helped with a street party when a halfway house was established in her area. She said that before the kids of the home were strangers, threats to a certain degree. There was vandalism and curtain twitching and uncertainties about leaving the door unlocked. After the street party (which involved plenty of food, music and a game of ‘dunk the police officer’) these kids became kids. Kids on the street, which is what they were all along, except now people know one another. (That’s not to say curtain twitching disappears – because who doesn’t love twitching the curtain? But at least you could put a name to the face: “Oh look, that John boy is doing a handstand”.) 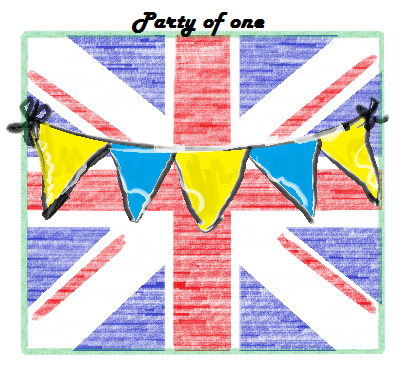 Last Friday was the royal wedding and across England street parties were thrown. My street remained free of any flag waving, but the city centre was hosting a large ‘street party’ in the centre square. They viewed the wedding on a jumbo screen, and afterwards celebrated with swing bands, music, games and a general ‘hanging out’ on the lawns.

Zsolt and I watched the wedding through the YouTube stream.  We started at around eleven – oh, her dress was nice, eh! – and stopped during all that singing, then picked it up again for the kiss on the balcony.  Apart from the human bits (Kate waving from outside the cathedral, Will trying to get the ring on her finger, Harry looking back as she walked down the aisle, and Will & Kate’s mixed expressions between wanting to smile, and not wanting to smile) I’d have to say the most impressive part of the day were all those hats. It was like a gallery of  pink, purple, black and beige headwear. British women own the hat.

And after the wedding I was faced with a dilemma. Should I go to the city centre street party? Zsolt was mule-like in his resolution to study (less than seven days now till his PhD defence, so can’t blame him) and I became more and more dejected that we couldn’t go downtown. There would be music and people and possibly a great selection of highly cheese memorabilia, and here we were in our flat missing the day.

Which is when I remembered my ‘do it alone’ resolution. I hate doing things alone. It’s a design flaw in my personality, initiating a solo activity (except for reading, writing, and general day-dreaming) take a momentous amount of energy. Essentially, I feel so awkward to be alone that I stop the activity before it even starts – and that was yesterday. I was stuck in my flat, mood dropping, and wishing I wasn’t such a coward.

So, I stopped being a coward. (wishes do come true!) Because if I can do big things like move countries, fight cancer and learn to drive stick (still in progress), I can certainly face a day in the park.

But, I had to give myself a goal. Goal: to find and buy souvenirs of the Will & Kate wedding to possibly give to relatives who I’m pretty sure would love them.

And suddenly it became much easier to go to a party alone. It’s a baby step, but a step nevertheless. I’m sure many people would fly solo to yesterday’s event without any anxiety, but this is just the way I work. Therefore, to help the situation, I gave myself a purpose.

Fast forward an hour and I’m wading through the paper cups, union jacks, tables, children, dancers, swing band, games, picnickers, and general celebrations of the Southampton Street Party. No names were given to the faces (this isn’t a real street party, after all, and I’m still too chronically shy to randomly introduce myself to a stranger), but it was nice to see what was happening.

But most importantly, I got over my inhibition. Okay, well, I cannot say it was entirely comfortable drifting through the scattered crowds, but a step forward is a step forward. A long time ago, way before meeting Zsolt, I spent a month in Quebec City alone. That was quite something. By the end of the month I was visiting museums, taking long walks, eating in cafes –all with pleasure instead of purpose, but that took time to learn. (A lesson which has faded, but at least it’s there to be remembered.)

I guess it’s good to remember that even when others cannot offer their support, you can still support yourself. That’s easy to forget, but important to remember. It takes a little courage too.

Hmm, there’s an Andy Warhol exhibit in Southampton that my husband doesn’t want to visit (plus he’s still studying, studying, studying). Maybe I’ll go alone this week and check it out. After all, practice makes perfect.

3 thoughts on “The anxiety of going alone”