Earlier this summer as we set to leave England, I spread my bathing suits and bras across the bed (accumulated over about six years) and began to say goodbye. Goodbye slippery pink cups, goodbye plain white t-shirt bra, goodbye your clever push-up, goodbye string bikini top . . . goodbye. Everything went in the bin (or the charity bag, depending on condition) except for my ancient O’Neil red string bikini – and not because I could wear it to the beach this summer . . . cause really, those triangles are small, but rather because of the memories. 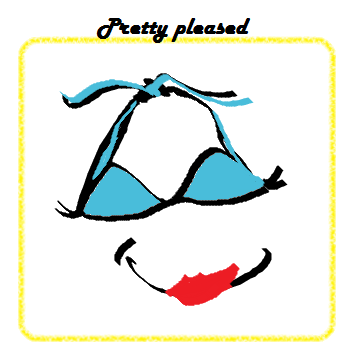 Which was, if you consider it, what the pile of lingerie also was – memories. Memories of boobs. And the deed was done, I had myself a good cry.

But today was lovely. Today-today-today I bought a string bikini. Not a bandeau wrap across the chest, those they are nice too post-mastectomy (particularly since I bought two for eight pounds at Matalon, though I think, perhaps the price is reflected in the quality of my butt-in-bikini, which is why I was on the hunt today for a new, discounted, end-of-the-season quality designer suit.).

Oh, I feel so naughty. Girls with only one breast aren’t meant to wear string bikinis. At least, according to the post-mastectomy land of lingerie product catalogues we aren’t. And I can see the point. Firstly, if we could all get away without the false-breast pockets they would be out of business. Secondly, most women don’t have tiny boob(s), and the difference between right and left would be like staring at a single hill in the middle of a plain. Something like that giant red rock in Australia.

But after going shop to shop and not finding any bandeau style, I just said, “screw this” and tried on a few cuts I never imagined acceptable.

Gosh, I’ll tell you what. If I still had both boobs (say I had reconstruction, or old rightie magically grew back), I’d have scandalized Lake Balaton this summer with my risqué so-damn-near-to-the-nipple outfits of string and fling and bikini hotness, it would have been awesome.  And while that hasn’t happened, I have happily noticed that despite having a neat and tidy scar running across my right chest, it is, one year post surgery, less noticeable.

So I put on this striking blue triangular thing (O’Neil has such fine quality suits) where the area isn’t quite so close to the nipple (which is good, because I’m down one of those) and BAM – Sexy bathing suit Catherine has returned from her summer of cheap, Matalon frumping. My ass looks great; my eyes are popping; and best of all – BEST of all – my boob, while looking small, is not strikingly missing.

Okay, if you know it’s missing, than you aren’t going to miss the ‘missing’ness.   (Am I misusing the miss?)

And I know it’s not cool to brag. Hey, my body isn’t 22 anymore, so yes, I’m fully aware of those cellulite jiggles and mystery circles rippling out from my thighs. But fuck it. I feel pretty. I feel like all those stupid bras and bikini tops last May thrown into the bin (or charity bag) weren’t discarded because I can’t wear them . . . they were tossed because I’m a spanking new woman who needs flattering, lovely clothes.

After all, it never hurts to feel good about yourself. And I never imagined a triangle bikini would ever again make me feel so freaking good.

This post is so absurd. I know it’s all ‘me, me, me’ but I’m excited. It’s like being told you can wear miniskirts again after thirty five (not my rule, I took it from ‘What Not to Wear’ so if you don’t like it, please refer to Stacy and Clinton), if you’ve ever been inclined to wear miniskirts – which, to Zsolt’s disappointment, I’ve never been.

Anyhow. Maybe I look just like any girl on the beach. But Zsolt thinks it’s beautiful too, so there you go.

Happy days, and just in time for my trip to Greece. Boyah! Great stuff. Sorry for so much self-indulgence, but I really needed to cheer.

And to top off this lovely day. Zsolt found a brand of clothing that suits his tall, lean frame and actually makes him look like . . . like a man. Like, a hot man. Like I could just grab him with both hands and sweep him away to never, never land. His outfit, in my opinion, is money well spent.

(Whew! Just had a wee scare. I had dropped my computer-drawing pen and thought it fell behind the radiator, so started groping the ground underneath and stuck my hand right through a thick spider web. Gross. Thankfully, with a second look, the pen actually only fell behind the computer screen. But still, my hand is totally grossed out. And I bet the spiders aren’t too pleased either.)

11 thoughts on “Scandal and the bikini boob”