Okay, so yesterday I spent my entire Friday in front of the computer webcam making a video. It was a heck of a lot of work for something that is totally basic – but there was the editing, the lack of a script (my dad taught me in elementary school to never public speak using a written script . . . so instead we’d write points and I’d talk around those ideas . . . and then in high school during my debating club days, it was the same situation. So yesterday, I figured I’d ‘go natural’ and just talk. Four hours later . . .), and then of course the editing of my rambles. But it was SO worth it. The final result is open and honest, even if not fancy. I reckon open and honest come first when asking people to fund your project.

Okay, so the reality is that in preparing for this kickstarter campaign, even though I’m a wee bit overwhelmed with its growing requirement of commitments and work, it’s freaking FUN.

And it was realizing that last week that scared the crap outta me.

During an interview with a fabulous local blog, Apt613, on the kickstarter book project, I was asked about how I could jump into such a big project with the news I’d just received? You know, where do I find the energy? And my only answer for that was that this is my energy because it’s my joy. I’m also kinda worried about what happens next once this goal is realized (with your help!). Where does that energy go?

And then the other day a neighbour said to my mom that she’d “heard your daughter isn’t doing well.” Which is fine, and so understandable. Except that I am doing well. For someone in my situation, I’m able to walk, there’s been no chemo as of yet, I have my hair, my energy is good, I can breathe . . . I am doing very well. 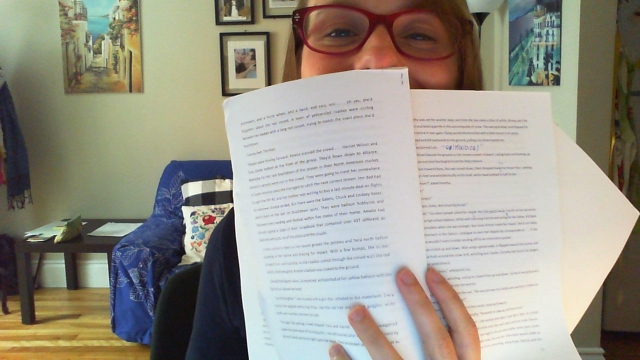 But having had these questions, they must have lingered in the back of my mind or something, because the other day I had a big pause moment where a feeling of panic suddenly overcame me:

Because when I work on my book publishing goal, those feelings . . . that fear . . . it kinda just turns off. Is it a good thing? Or am I being naive?

Last week I had a coaching session with this lovely lady named Camille Boivin. She’s from Ottawa and I work with her for her company Sister Leadership. Anyhow, Cam is full of generosity and a desire to help people connect with their emotions and ambitions. And when the cancer came back, we started working together not as client and writer, but as coach and person-who-needs-some-emotional-work-done. (That’s me.)

So last week in our session I was talking about this anger I’d been feeling. And somehow that discussion of anger turned toward a discussion of sadness. Because along with that anger, I was feeling deeply sad (and still do sometimes, like when I realized last week I wasn’t feeling shitty enough). So we honed in on that sadness. Cam asked me to look back over my life when I’ve felt similar feelings of sadness.

*In this case of metastatic cancer, I’d say the sadness isn’t just about the disease, but more so about potentially leaving my husband behind and hurting my family and friends. The idea is completely crushing.

So I began thinking back in time when I’d felt feelings of loss and sadness. School graduations. Ends of summers working abroad. Moving to a new country. Saying goodbye at airport. Leaving a beloved workplace. Losing my golden retriever . . .

And then Cam asked me this: “If you could go back with what you know now, what would you tell yourself in those moments of sadness?”

And I said to her, “that even though it hurt, good things were coming . . . and love doesn’t stop just because you are separated. The love keeps on going.”

Because from school graduations came new schools, clubs and friends (and I just attended the wedding of my first friend ever – we may not be together always, but the love stays); end of the summer working abroad brought me back home where I found a bookstore job and made more friends there (though I’ll always love the Jasper Kids from 2002);  In moving to a new country I left my family and best friend, but learned oh so much about being independent and made such incredible friendships with people who I still carry in my heart even after returning to Canada; saying goodbye at the airport always means I get to say hello to someone on the other end; leaving my work gave time and space for me to become a writer; and losing my dog – well, that still hurts but the love doesn’t fade. Not one bit.

So I guess if I could go back to those moments when I felt that sadness, I would just tell myself that I’m not leaving the love and by moving forward more good things are going to happen.

Since that conversation I’ve felt a lot less angry, a lot less sad. I’ve been to doctor appointments, blood draws, chemo wards, searching for clinical studies, urine samples, meds from the pharmacy, acupuncture . . . but I’m not grieving the Catherine of four months ago who was almost certain she was cancer-free.

Today I am here, and I’d rather run forward toward whatever good can be created. This kickstarter is part of that. Being proactive in my health is part of that. Not being sad has been a result of those reflections.

Is it normal? Will it stay forever? Is it denial? Is it really because I haven’t met with Dr. Canada? I just don’t know.

How often should I think of the cancer, and will it do me any good? Again, I just don’t know.

It’s so strange to wonder if I’m not fearful enough. I also realize I’m new to metastatic cancer, and therefore incredibly naive to its realities. Is there a right way to cope? I would actually really appreciate hearing other people’s experiences with this fear vs. life thing – is there any use in holding fear close? I’ve been happier this past week than I’ve been for a while, and that is quite precious in these times.

Anyhow. That’s all I have to say about that.  Now, back to work!

To not overwhelm you with blog posts, I’m going to slip in the second excerpt from The Adventures of Claire Never-Ending. Meet Elizabeth (Amelia’s mother) and read her story here! If you want to sign up for an email notification when the project launches, you can do so here.

19 thoughts on “Am I not paying enough attention to cancer?”