Well – that was interesting!

This past Sunday took me over to Kanata (part of Ottawa) for a book signing event. Though when I say event, I really mean a wooden table, my books and a sign. But since this was my first book signing ever, I suppose that could merit ‘event’ status. Why not? 🙂

As I said, it was interesting. I feel like the occasion took part in three stages. Here they are:

Stage One: A throwback to preschool.

I arrived at the bookstore with my laundry basket full of book signing stuff – big sign, extra books if necessary, stand for the big sign, some quotes, some business cards and . . . no pen. I forgot the pen for the book signing. My mom dropped me off, and we decided she ought to stay for a cup of tea for a little while. So while she hooked us up with the teas, I set up my table.

Chapters was really good and put the signing table right at the front of the store. You really couldn’t ask for a better spot. So that was lovely.

We sat at the table and drank our tea. A few folks came up and one women actually recognized the book from the newspaper! She bought a copy for her daughter who had just given birth. I think that is awesome. Eventually my mom was like, “time for me to go…” And I was like, “NOOOOOOOO” because it feels soooooooooooooooooooooo awkward to be at the front of the store looking at people pass by just hoping someone might toss you a smile. It’s really uncomfortable stuff.

Ten more minutes tick by, and finally I said okay, she could go. Not that I was literally keeping here there – but I mean like she could go as in, I realized it was time to grow up and harness some courage.

After mom left, I was at the table sitting down and sipping on my tea. It continued to be weird. People walk into the shop and will either 1) make eye contact, smile and immediately move away, or 2) make no eye contact and keep a wide distance.

One lady asked if Claire Never-Ending was a kid’s book, which is totally understandable since it’s a fun cover. I’m going to try changing it – even if I do love the cover. She’s my first, and will always be remembered. I’m debating between three possible options for the next cover: random woman absorbing the world type image, random woman looking pregnant type image, or random connection to ancestry type image. I say random because it’ll most likely be stock photo – though I’ll carefully pick it.

Anyhow, it was a really painful hour. Weird-o-rama. However, I did sell a copy of the book to two ladies – a mother and daughter (the mom was 92) who were both named Olive. Apparently the name doesn’t go very far back in the family, but it does extend to cousins across the world. Cool.

While waiting for the agony of a book signing to end, Kevin and his daughter popped over to say hello. Kevin dropped off the copy of his book I’d asked for, The Novel Writer’s Blueprint, since I’m hoping it will help me kick some butt with my writing. And Lori popped over too with her two girls. Lori and I were in the photo collection Faces and a Cause shot by Lou Truss. She’d come all the way across town to buy two of the books! So, how is that for awesome? It was a delight to see everyone.

But then they left, and I was alone again.

This is when a lady named Karen took her shift at the book store. She was working at the front of the shop greeting customers as they browsed the aisles. Karen came over to my table as I sat there feeling uncomfortable.

“You’ll never sell anything that way. You have to stand up.”

“Yeah,” she tells me. “You have to stand up and say hello to people. Have you got anything to give them?”

“I’ve got these?” I showed her my business cards that look like book.

“Bookmarks! Great, ask if they want a bookmark,” she suggested.

(Of course this wasn’t our exact conversation – but it’s the gist. Karen also introduced me to another fellow who worked at the shop, who was, apparently “as shy as you are!”) 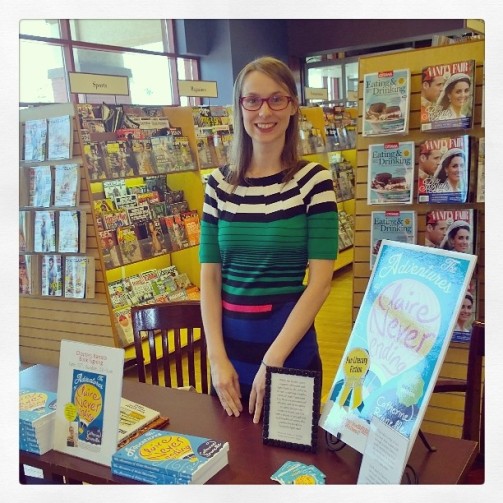 So, I stood up and handed out ‘bookmarks’. The first person I offered a bookmark to rejected the offer with a decisive “no.”

“That’s okay, you asked her and that’s what matters,” encouraged Karen.

I did. I did ask her. She said no, and it didn’t physically hurt me. Besides, honestly, if someone doesn’t want the bookmark, it saves me one bookmark for someone who does want it!

For the rest of the time I was there, I was literally springing bookmarks on people. They would be whizzing by, and I was like “HEY YOU! TAKE A BOOK MARK!!”

Some people said no. But, several people said, “okay,” and of those a handful of them stopped to actually ask what the book was about, and of those I actually sold about three copies. And all of that happened in about 30 minutes of standing and throwing bookmarks at people. Imagine how it would have gone if I’d been doing that the entire time?

THEREFORE, it was a very worthwhile event. And standing up to launch bookmark assaults on customers felt far better than sitting down and hiding behind the pile of unsold books. It was still awkward, but it was good awkward. It felt kinda . . .adventurous.

So, good first signing! It was scary, and I reckon they’ll keep being scary but at least I know I can (at least) stand up and say hello. Maybe one of these days I’ll wander into the aisle and chase potential readers through the book stacks. Maybe…

And that is the story of my very first book signing event. Thumbs up for learning.

P.S. I used to work at that Chapters for about three years. Back when I met Zsolt and kept flying between Canada and Hungary, they essentially funded the plane fare by allowing me to pick up work whenever I was back in Canada.