We are here, we have arrived. As I type this, I’m looking out the bedroom/office window and can see the peaks of neighbouring homes (red tiles) and green gardens. There are electrical cords too, but let’s skip over that feature. Hungary:Home. We are here.

The past two weeks has been such a lovely disconnect. Big Z couldn’t say the same, I am guessing, considering he worked for quite a bit of the trip. However, we still crossed Europe quite happily and still managed to see the sights.

[warning, I’m feeling lazier than usual and will not be checking for typos. Read on at your own risk. Editing may come later as a result of post-posting shame]

Nice was *happy sigh* so nice. Between the thunder storms and work deadlines, we managed to stroll along the promonade and soak up quite a bit of ambiance. Essentially, we were able to – ten years later – revisit the site of our first meeting. There was Villefrance-sur-mer that I tend to never stop talking about.  Stepping off the train, I immediately recognized the roads and turns taken on our original visit. Ten years later, and it’s still deeply impressed in my mind.

This is a small, old fishing village where the buildings are ancient and painted in the Mediterranean colours of pinks oranges, greens and browns, and they are lined up very closely together to help block that beating sunshine. 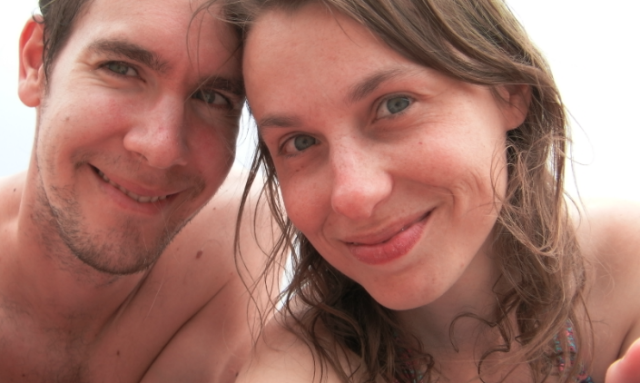 Hot damn, look at us! Why can’t my hair do this more often?

We wound through the streets and made our way towards the beach. Ten years ago, Zsolt had not brought a towel along with him for the day – so, even though I didn’t actually know him – I let him share mine. Hormones and adventure mixed together created quite a different Catherine than the world had ever seen before, back then. So, during our recent trip we shared a towel again.

Then later in the day, we visited an old Nice ice cream parlour where the waiters have been, both times, not so lovely. Hot milk for me, ice cream for Zsolt. It was pretty special, actually. Pinocchio is really the spot that was our first ‘date’ in that it is very date-like. A guy and a gal can’t share a strawberry ice cream dessert (eaten ten years ago, before I broke it off with sugar) and still decree it wasn’t a date.

Later that evening, while walking down the beach promonade and listening to the various buskers serenade us – saxophones and cellos – with their karaoke backups, we debated the spot of our first kiss. Thank goodness for facebook – we were able to look it up and then revisit the exact location the following evening. 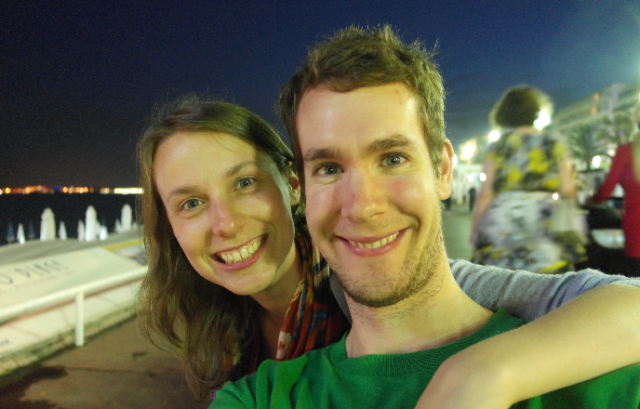 So talk about your nostalgia!

Following this was another flight to Milan. (We had flown from England to Nice and had mucho, mucho turbulence. On the flight to Milan, our seat was at the very front of the plane. Turbulence happened again and my hands started tingling then going numb – I was going into shock, I think. Or just having a panic attack. However, I didn’t not tell anyone this…at least, I didn’t tell anyone official. The airline steward was kind enough to let me know it was perfectly normal and would be over in 5 minutes. See, they should always do this. I’m far better when someone official explains what is happening, rather than 20 minutes later come over the speaker and say ‘oh, we had some turbulence but it is done now.’)

Anyhow, Milan. Mostly, we saw the train station. And in the train station, we met some very rude people. Ugh. This made me grumpy. But again, deadlines had to be met! On the day of our flight, we woke early to walk around the city, and I think the visit was salvaged. Zsotl had some soft, flurry lemon flavoured pastry that the clerk said was the best in Milan and had a wonderful reputation. My sugar-free self was just a bit envious, but I admit: I licked it, and it was good.

And now we are here. Back in the real world, but not the real world. Anna, my mother-in-law is struggling with my eating habits: no flour & no sugar flying the face of all common Hungarian sense. She doesn’t use the internet, so I’ll have to give her some ideas. It’s a very strange dynamic, her kitchen, and I try not to get involved as much as possible. however, the other night she asked if I want to eat pizza for dinner, so I think we’ll need to work on the challenge together.

And speaking of food! I just learned that Zsotl’s sister Anita has a lovely blog sharing her spin on recipes – creating food for those living with diabetes. The food is all diabetic friendly, often gluten free and certainly low sugar. Go and see for yourself. She’s the Dessert Room (Desszert Szoba).

You’ll need to select the English translation via the google widgit. It’s in the right hand column. AND she takes all the photos by herself. She’s a damn food artist, and I never knew it!

From Anita of the Dessert Room

Okay, that’s all from me. I know I promised sentimental posts – and I reckon this didn’t deliver. Remarkably, I was quite composed during the entire visit – except for this part:

We’re walking hand-in-hand down the beach side promenade, having just left Pinocchio‘s ice shop. Just as we’re nearing the Negresco, Zsotl stops and begins telling me that he’s so incredibly happy, and that I’m the love of his life, and everything is so much better when we are together. And he just says all this stuff, and it’s almost better than a wedding proposal how it tumbles out and his stopping makes it such a moment. So of course, I want to cry, but rather just throw my arms around him and bury my face in his shoulder and hug, and hug, and hug.

It’s funny, in the movies I guess they’d have us making out like crazy as the camera spins around us, but in realty all I really, really wanted was to be as snuggled into him as possible. And then of course, share a kiss. But it was his stopping and our hug that I’ll remember. What a romantic man.

P.S. Oh my god, Anna is frying bacon and I can smell it from up here. Whatever she’s making, I want to eat it.