It is Tuesday afternoon. Zsolt and I are knocked out and still in bed. He is working between his sniffles (the man has a cold) and I am blogging between my aches. The timer is set so every 45 minutes we get up and do some movements together. It helps a lot and the pain I felt all weekend is loosening its grip. It’s a pretty nice day together, despite our utter exhaustion. He is sick, and I should probably be 10 meters away from the man at all times, but damn I missed him so much. I cannot bring myself to leave his side.

This past weekend was the Big Trip for my father and I (I wonder how my Dad is doing today? He’s back at work while Zsolt and I get to hang out in bed!). Dad and I headed out west for the weekend to visit with family. It was a very good visit, but a challenging one too. I may as well tell it like a story rather than recounting just takeaways. After all, life in reflection is really about the stories – takeaways have little impact without them.

Thursday evening Dad picked me up 3 hours before our flight was due to leave. Normally I’d oppose this, but he felt it was important and I figured it was easier to not argue. So! We got there early and settled in. The plane left on time, we jammed ourselves like a bunch of sardines onto the flight, and then whoosh! we were off to Edmonton.

After we arrived in Edmonton all seemed well, but I woke up in the middle of the night with throbbing shoulder pain. It got so bad I had to wake up my father in the other room around 2 AM. Poor guy gave me a treatment in the middle of the night. Thank goodness for being born into a family of health care practitioners. Not everyone can call upon their chiropractor and energy guy at two in the morning. After the treatment, I eventually got back to sleep. And the next morning, we went out and got me a very flat pillow (best for my neck and shoulder), a cute little heater, a hot water bottle and a kettle in which I could boil water for the bottle.

Take Away: My Dad was so kind. And, I’m high maintenance!

The weekend itself was all about getting to know family. I liked the little moments – things like car-ride conversations, getting tea, comparing book lists, doing some painting. The big event was the family reunion on Sunday. My aunt held it at hers, and so many people came. It was quite something. A few I had known in my adulthood years, but many not. It was very meaningful to establish these connections again. There’s just such a difference in perspective in this phase of life. As a kid and teen you want to slip away during family events, but now I want to know who these people are – what makes them them?

And I found the questions arising again and again: how are we the same? What makes us family? What in you do I also see in me? What is being passed on to the next generation of kiddos (there are many kiddos!) that I know is in myself too?

For me this weekend was about friendship, family and legacy. Growing up without sisters, it’s good to connect with my cousins – particularly the ladies. And now not having any kids, I wonder what of myself will ever ripple forward? It’s so self-focused, I know. Don’t get me wrong – I see these people and they are their own bright excited adorable ambitious surprising sparks. They are their own. But to recognize a little this or that of something I also hold is a comfort. It’s a weird comfort.

Dad caught up with his family – saying both significant hellos and goodbyes. (He had his own important journey this past weekend.)

I loved this. Everyone we met with was a keeper of a story. Everyone would recall a ‘remember that time?’ story about everyone else. One bit og history after the other, I think the older generation rebuilt their connections, and the youngsters learned a little something.

Here’s an example. My one uncle (the youngest of many brothers) once shot a pistol bullet through my Dad’s window where they lived (back when they were kids) as retribution after my Dad (one of the middle brothers) got that uncle’s baseball bat chopped into pieces. Why was it chopped into pieces? Because the oldest brother initiated a machete-vs-bat fight with my father. The wooden bat, used by my father, lost the battle.

That’s the tone of many stories. 🙂

Take away: way too many things for this blog post.

Hmm. And now we are back in Ottawa. Walking off the plane, through the airport, was a struggle. An emotional struggle considering what was to be faced upon our return, and all the emotions and connections we knew we were leaving behind for a very long time.

Today was a day for being in bed. It’s now much later in the day, and I’m finishing this blog post. The doctor called today, Dr Canada. Not only am I not eligible for that study I thought I’d go on, but it turns out there are spots of cancer in my brain tissue now. Before it was just in the skull… not anymore. Turns out the game is changing once again. Turns out life can be pretty hard sometimes.

But you never know. The underdog keeps fighting – and a story much expected to go badly can something surprise you. Hey, if the Ottawa Red Blacks can shock the CFL with their AMAZING win the other night – who knows what other awesome moments are in store?

The most awesome of moments from this past weekend was actually not a moment. It was my Dad. He was awesome. Being with him was lovely, loving and fun. I’ll cherish this weekend not only because I reconnected with far-away family, but even more so because I got to be with my father.

He’s definitely the best takeaway I could ask for. 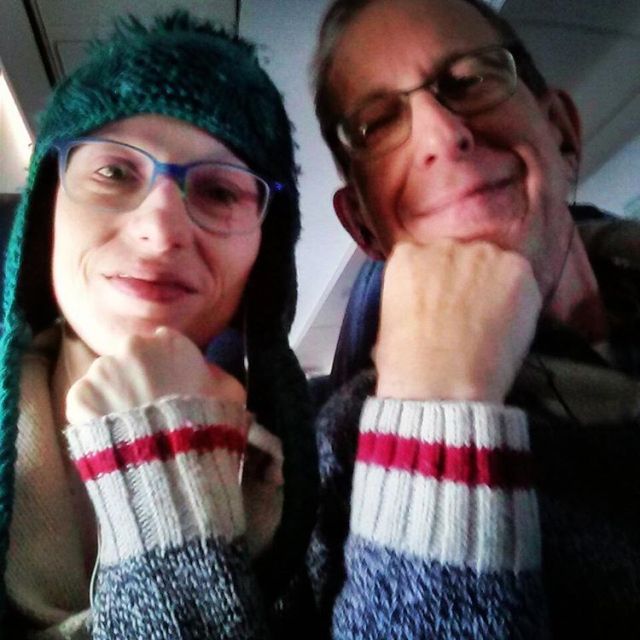