While my tea cools I’ll tell you about yesterday.

Zsolt has graduated. 🙂  You should have seen in him that gown – the man is already really tall, but drap a gown with vertial panels of maroon and blue on the guy, and suddenly he’s a freaking giant. Topping off this outfit was a large (like your Christmas dinner plates large) floppy, circular and velvet black hat with a tassle in the middle. No one looked spectacular in that hat – why they make Doctors and Professors wear it can only be chalked up to history, because certainly it’s in no why fashionable (or flattering).

So, adorned in his gowns, we then hit up a photography/party with his school at the ORC (Optoelectronics Research Center). This was lovely because many of our friends were there – five years of a PhD with these folks, so we’ve become rather good friends. Everyone started at the same time, and everyone is finishing (roughly) around the same time too. To imagine not having these folks in the same city feels strange, just like it does with my other incredible Southampton (Hampshire) friends.

[In the meanwhile, except for grad yesterday, I keep running off to meet with people. Anna, Zsolt’s mother, is amazed at how social I am . . . though I’m not actually that social, I’m just in a hurry – there’s really no time!]

With the bunch in a group, along with some professors and tutors, pictures were taken. Wow, they did look good in their stupid outfits – I was impressed. And proud. Pride was lapping over the edges of my smile and splashing over everyone. This was my husband graduating, and he’s done so well. I know the ups, the downs, the frustrations, the victories – his story is partly also my story and we’ve gone through a load of stuff (good, bad, the unremarkable) together. To see him yesterday all dressed up and with his class was really a great feeling. Hopefully (apparently) he also felt quite fine.

Photos were followed by champagne and strawberries. Lovely. Unfortunately due to not having lunch – I was essentially rather buzzed after one glass of champagne (a lasting chemo after-effect) – and while people say alcohol loosens them up, it simply unscrews my head. Therefore, I ditched the champagne and ate three bowls of strawberries (drown in cream), which did the immediate trick of restoring my balance.

Anna and Lászlo managed alright considering they don’t speak any English. (Actually, that’s not strictly true because between the three of us a conversation can be held –yes! finally – however it involves making ourselves look slightly idiotic with word fragments and hand motions, and so, of course, they didn’t want to play charades yesterday with the director of the ORC. Zsolt translated.)

And it was off to the ceremony.

Ahh so long. We had excellent seats, but it meant arriving perhaps a bit too early. So, after an hour of waiting – the procession began and everyone (staff, chancellor, porter, etc) took their seats. There were plenty of tipping floppy hats and speaches. One nice looking older man became a fellow, and another – after a long bio of his life read by another floppy hat professor – was given a doctorate in science.

Zsolt looked wonderful getting his degree. He had removed his hat and ‘hood’ and the porter fellow walked with him over to the chancellor (who was also wearing robes, but his looked very grand with a bumblebee gold and black striping across the front). Then Zsolt knelt down in front of the chancellor, who put the hood across Zsolt’s shoulders. Next, Zsolt stood up and put his hands togeather as if praying. The chancellor placed his hands over Zsolt’s and they had a small, whispered, conversation.

No, it was more about ‘what are you doing next’ and stuff. Anyhow, after this, Zsolt walked off the stage (and since he was one of the last of the people I knew graduating, my interested followed him off the stage as well). Then it was about another hour of clapping and speeches.

But enough with the details! Zsolt is Dr Zsolt, and I’m just bursting with pride. A big gold star for my husband, cause he was great yesterday and he’s been great these past five years. Way to go Zsolt!

And now I’d better get off this computer. The family is waking up, and each time they see me typing they say; “Catherine, you’re working again?” and I say, “No, no,” because this isn’t work. It’s total play.

(Apologizes for misspelling the Hungarian words – Zsolt isn’t awake yet to check my mistakes.)

This morning is waking me up with a mental ‘to do’ list knocking at the door. It first started knocking around 5.30am, but I sent it away through various mental images of babies being put to bed, boats adrift in the water, river currents taking away my thoughts (plus the addition of a shirt over my eyes to block any/all light) and it must have worked because eventually I fell asleep. However, it didn’t work for sooo long, or maybe the t-shirt fell off my face, because here I am typing away at 7.30 am and hoping that the clackity clack  of this keyboard doesn’t wake up Zsolt. 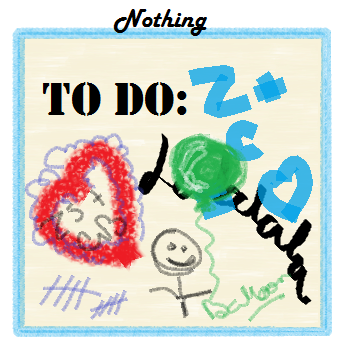 TO DO: Firstly, call the various utility companies and request a cancellation of their services. Unless I want to pay for another month of service, this needs to be done today.

TO DO: Zsolt has to drop by the printers to arrange a hard-binding of his thesis. It’s an expensive errand (most are these days) but the results are forever. For generations to come, his work will sit somewhere in the University of Southampton’s archive of past graduates, and maybe one day – when either he or I become hyper-famous, they’ll remove the book from its shelf and display it in the small gallery tucked toward the back of the library. “And here we have the writing of Zsolt, Hungarian scientist extrodinaire”. Well, regardless of whether that happens, the thesis, hard-bound and pressed with gold leaf lettering, will take a place of honour on our bookshelf.

TO DO: Little Peugeot needs to be sold. This is a must. Today we’ll be taking it around to the used car dealerships to see what type of prices they quote (so we have a sense of its value, but also, if we don’t find a buyer before leaving we’ll get the best of the worst prices, because used car dealers probably wouldn’t offer the ‘actual’ value of a car, considering they need to sell it later and make money from the exchange). Poor little Peugeout, she’s going to be poked and prodded.

TO DO: Sell the blooming mattress. Unfortunately despite being quite comfortable and good quality it has two strikes against its favour: strike one – it’s used, even if only for a year, it’s nevertheless used. Strike two – it’s a king size, which apparently doesn’t jive in this chocolate box land of petite and practical housing.

TO DO: Clean this apartment! Life imitates schedule. I’m busy : my apartment goes bizerk. For the past month things have been quite smoothy running in terms of housekeeping, but as soon as I began my marathon of goodbyes (aka, a great excuse to go out everynight and many mornings), the tidiness of this place has suffered. IF time allows, I’ll pop in a DVD and clean this entire mess up. When cleaning, always have a source of entertainment – whether it be music or a show in the background. For me, who hates cleaning in general (it’s not in my DNA, just ask my father), entertainment is essential.

TO DO: Say more goodbyes, heart breaking stuff. Yesterday I left a friend who I’ve known since my MA days at the Uni – she’s one of those inspiring women I was raving about the other day, and it was quite crap to say goodbye. And today there will be more of the ‘goodbye’ing, no crying, as work begins to wind to a halt. Friday is my last day.

TO DO: Pack. Ugh. Not worth discussing at this point.

TO DO: Write! Which clearly I’ve started on, and will need to continue once a bit of sky breaks in my day of busy activities. Yesterday I had some time alone in the flat, which is a rarity, and was able to use the main computer to begin my article-writing adventure. So far, so good.

Okay, time to get a move on – and maybe draw a picture. 😉

Thank you for your company, and for reading my to-do list. Now that I’ve blurted the whole thing out, it feels far more manageable. Writing as therapy always does the trick. And so, onto the dishes.

Today at the Avenue campus someone (a student, I’m guessing) left a trail of sticky notes throughout the halls. Some were on cupboards, others doors, a couple bulletin boards . . . and I spotted one more in the stairwell. And written on these little yellow sticky notes were a variety of positive messages. For instance, one of them was a stick person with two speech bubbles. On the left speech bubble (and crossed out in red) it said: Why me? In the right speech bubble it read: Try me! I guess it’s equivalent to ‘turn that frown upside down’, eh? 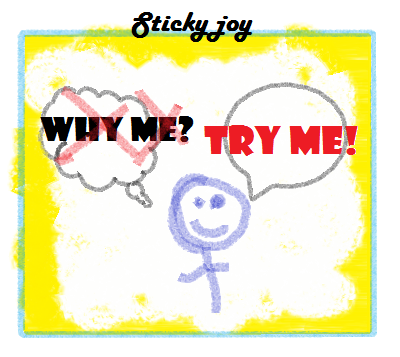 And then I started to find the quotes. Now look, my short term memory is a sieve so I can’t recount them all, but one was from Ghandi (i.e. a quote from Ghandi): Don’t cry for it ending, smile because it happened.

I am happy it happened.

Not the cancer, nope, not that.

The friends, the challenges, the writing, the working, the living, the grocery shopping, the tea drinking, the sofa shopping, the Lost-a-thons, the orange eatings, the portswoodings, the guy foxings, the spring flowerings, the movie nightings,  the self-explorings, and the apartment hoppings. Plus that fabulous fried chicken served at Pleasure Garden.

I’m so incredibly happy for all of it.

So here is to smiling, not crying. And to good memories, not bad. Mind you, come May I’ll be a human rain machine. Sentimental expression has become my middle name (Catherine Sentimental – Geez, is she crying again? – Brunelle). But it’s because of all the good things, and not the bad, that I’ll cry come next May. That is a positive contrast to last year.

Sticky notes with positive messages. Maybe you could try some yourself? Afterall, there’s no need to sign a name to your little kernel of positivity. It’s good vibes sans embaressment. Believe me, people WILL notice.

Here is my sticky note for this post: When one door closes, another one opens. Like my time in England and moving to Canada, and like the end of this posting followed by dessert.

*Oh! I burnt the apple crumble. Blog posting is too absorbing.

The end. For real. For real, for real – because it’s time for dessert! (minus the burnt bits)