Well today went smoothly. I’ll tell you this, I’m getting used to the process – and not having a needle makes it all much easier. 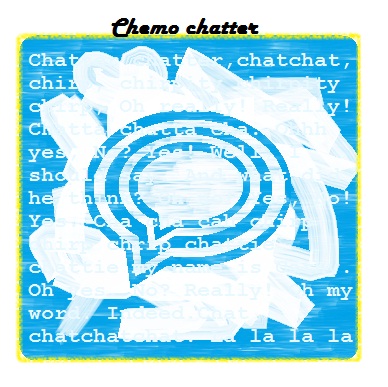 Zsolt and I arrived on time and were seated in green chair number four. I think waiting all depends on whether or not you catch them at the right moment. We walked into the treatment room and every chair was full except for one. Lucky me, my chemo had arrived and a chair was available.

A very nice nurse, bless her, who has an extremely nervous disposition, set things up and began the drip. She’s a nice woman, but quite hesitant in her language. There’s no doubt in my mind she knows what she’s doing, but nevertheless she vocalized her every action. “Here is the antihistamine, I’m just getting ready and, umm, putting it in. There it, ahh, goes. So you should soon feel a bit, umm, sleepy.”

The first time meeting her I was overwhelmed; not by her manner exactly, but by the amount of information she was gave. Nurses have to consider many aspects while administering drugs; the checklists in their minds appear endless. Actually it was from her that learnt about the sleepiness. Before I thought it was just the drugs making me ill (well, it sorta is the drug making me ill/dopy)  afterwards I realized it was the antihistamine. Mentally that helped in accepting the process.

I’ve heard that the word ‘like’ gives people time to think while forming sentences. She was probably, like, doing the same thing.

And then my head lay down on the pillow with hopes of sleep. Hmmm . . . Problem with trying to sleep in a chemo ward: chatter!

Take a room full of women getting chemotherapy and you have chatter. Someone may as well roll in some tea and biscuits to make a proper tea party. Most people are hit by the dopy drug; there’s a period where ladies calmly tilt back their heads with closed eyes – but it never lasts.

Today these two women were discussing the side effects of paxlitaxol, which is the same therapy I’m on currently. This one poor woman is losing her nails. First came a brittleness, then nail loss.

Oh my goodness. Here is my problem, unfortunately we are all tied by this common experience and it’s ultimately our first point of conversation. “How’s the chemo, Fran?” “Oh lovely, Sarah – my diarrhea has slowed and that rash went away.” (Okay, no one discusses their diarrhea, but your likely reaction is similar to how I feel about missing nails)

So I slept on the pillow, but also, and quite uncontrollably, eavesdropped on conversations. At one point I had plugs shoved into my ears and hands over my toque but I could still hear the ladies lunching.

It’s that time of the year when everyone is sick. During the week I am either a social hermit or an overly paranoid germaphobe. Any hard cough and my office door is closing. If someone is sick our plans are cancelled. Essentially, I’m being proactive.  It’s only for two more months and afterwards I’ll make up for my lack of social life. But in the chemo room there’s no choice with who you sit beside. Today there was a lady with a fierce cough. She picked it up from her husband (again, I was totally eavesdropping) and hasn’t been able to shake it off.  Anyhow, at this point in my listening I turn away and bury my head into the pillow. Stay away cough!

It’s really interesting in the room. Everyone wants to share their experience –  except Zsolt who reads his book while I’m resting; he purposely avoids eye contact with the other people so he can get on with his novel.

But no wonder they chatter. We’re making the best of our situation, and part of that is through conversation. New families come and sit in worried circles, and of course they’re curious. Other people are alone and talking helps establish community.  While I hardly talk with the ladies (because I’m sleeping, and I must look crazy to them with my oranges and pyjama outfit) the idea of talking is normal in a room filled with women. However, I still don’t want to hear about the nasty side effects, or pick up anyone’s bug.

Hmm, just realized I haven’t mentioned my meeting with the doctor. Okay, will do tomorrow. It was a good meeting, but the result won’t be confirmed till I hear from Canada.

It was a busy chemo today – every chair was filled and (almost) every mouth waggled. Now that we’re home (now I’ve finally napped) it’s far more peaceful. Good to be home, as always – and yes, I’m doing well. 🙂

Shout out to my parents and the group at Ultimate Wake Up! Have fun this weekend, it’s a great expereince.

One thought on “Chemotherapy conversations”