Back in England I had a really great hairdresser. She gave me my last haircut pre-chemo, and my first haircut post-chemo. There was a trust. So when I visited her for the final time before moving – hoping she could help tidy my bizarrely curling re-growth, she gave me the following advice: “Catherine, just let it grow.” 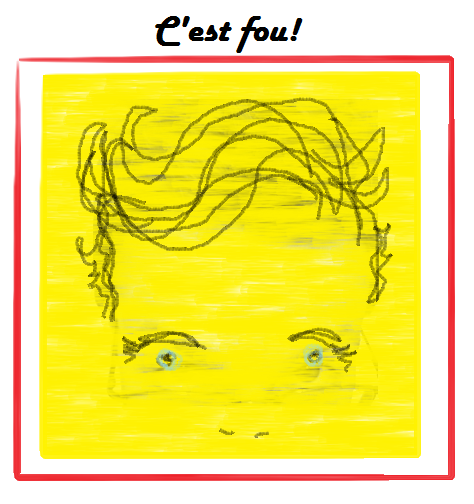 I don’t know about you, but I crave longer hair. Once in a while I dream of my once straight, chin-length hair and think, “fantastic, I can pull it into a ponytail” only to wake up and realize that no – I can’t. Not yet.

But you know what people keep on telling me, and I bet many short-haired women hear the same: ”It looks great short. You should leave it that way.” My cousin told me the other day that I standout more with short hair.  Well, if I pop with this short hair, I must have kaboomed with my bald head last year.  There’s nothing like being totally bald to totally get noticed. Combine my cue ball looks with the dark nail polish I wore everyday (in hopes of keeping my fingernails) and I was downright punk chic.

And actually, I’ve known women who keep their hair short following chemo and do look fabulous. But for me, I just think back to when the hair started returning . . . that moment I realized there was a shadow across my head (Zsolt pointed it out), and it was fracking hair.  Forget about winning the lottery – hair growth is an incredible feeling.  Happy dances are followed by tears – tears leaking through my newly grown lashes, being whipped across my face and soaking  my newly grown brows. Those first few strands are a promise of normality. The possibility of looking like yourself again.

It was like a promise that everything could pass. A new Catherine was growing.

Anyhow, maybe in fifteen years or so I’ll cut it short again. Variation is the spice of life, and I do like my life tasty. But for now it’s got to keep GROWING. Just because it’s confusing the heck out of me at the moment (it is curly, is it straight, should I cut it, should it grow – is that a MULLET behind my neck?!), doesn’t mean I’ll abandon my goal for achieving a cute, chin length style.

(But, if anyone has any tips on how to grow hair, or what to do with it between acceptable lengths, please pass along your slice of genius. So far I’ve considered the headband (child-like), hair clip (a good idea though I left them all in England), headscarf (but nixed that idea – too chemoesque) and just letting it go wild. Wild has the best results, but as time passes . . .  I’m thinking it’s a little too crazy.)