Something strange has come over me, something that has never really happened before. Upon arriving to Hungary, after about 22 hours of travelling, Zsolt and I first visited his sister in Budapest where we stayed the night, then travelled onward to Lake Balaton. At the lake (a lake that holds a big piece of my heart, as many of you know, but where the cottage also gives me crazy allergies after about two nights of sleeping in the big room) we met up with his parents for the weekend. Six of us in the small cottage: Zsolt’s sister, brother-in-law, parents and us. When we pulled up in the car his parents had already arrived; Anna (mother-in-law) came running towards us with her hands waving and say, “Hello, hello!”, then gave us careful and restrained kisses on each cheek. Zsolt followed that up by giving her a hug (even though they normally only kiss on the cheek) and I think she appreciated the affection. 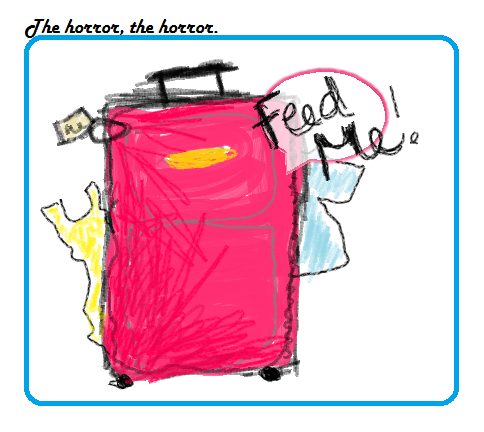 Something strange has come over me. I think it’s a combination of last year’s adventure where we moved A-to-Z every half a week visiting friends and family, plus this past week before leaving when we were at a cottage with my family in Canada, then added to by moving from location to location once arriving in Hungary.  Somewhere in there a switch has flipped. Suddenly, without warning, I have developed an extreme need to unpack my suitcase.

Never do I unpack the suitcase, unless we’ve finally arrived home . . . and even then, it takes me a week to bother. But upon leaving Balaton (see you later, you big blue water . . . and allergenic reactions of itchy eyes and throat) and arriving in Zsolt’s beautiful home town of Pecs – I HAD to empty that suitcase.

Didn’t matter if the clothes had to be piled neatly on the floor, the shelves, the desk . . . the only thing I could really think about was taking everything out so I didn’t have to root through the case one more time for a spare sock, or bra (or boob!), or whatever. Thankfully, Anna had made some room on the shelves, so there was the perfect amount of space for my stuff. It’s all out now. The t-shirts, the dresses, the sweaters, the underwear, the vitamins, the beauty stuff.

And what’s even crazier, is that today I TIDIED. Couldn’t stand the growing mess of two days in the same room – had to put everything away where it belonged. Could Not Stand the mess!

What, I ask, has come over me? Back when I was a little girl, I used to push the toys and clothes under my bed (hidden by the dust ruffle) whenever instructed to clean. Even today I don’t love pulling out the gloves and attacking grime and/or dust . . . but an untidied bedroom? No. No. No. No.

So, clearly someone has secretly hypnotized me into a compulsion for order. I have my suspects – you know who you are (mother, father, or husband. Most likely husband. . . Zsolt probably whispers in my ear at night, “clean your side of the bedroom, pick up the mess.”)

Lesson Learned: Apparently some things do change – like patience, temperament, and preferences for having an essentially clutter-free room.

I don’t know how it happened, but it has happened.

Maybe soon I’ll feel a compulsion to clean the bathroom, scrub the floors, vacuum the house, dust the shelves and clean out the fridge. Maybe. But that would take some really strong hypnosis . . .