These are one of those posts concocted in my head at 3:00AM. It feels like a good idea at the time. . . so I start writing it (in my head) and then say, “No you don’t, brain! We are going to sleep now, not write blog posts.” So it gets grump and tries to keep writing. And I need to make a promise that tomorrow (if we go to sleep now) I’ll write a real post all about the idea, and share it here. 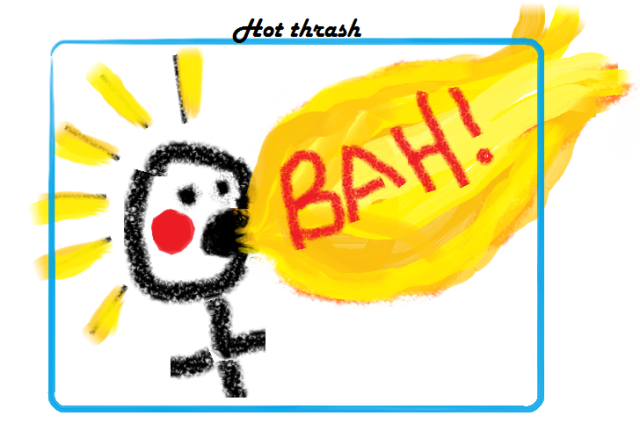 This past week I had one major angry fit. It was like hot flash amplified. There I was lying in bed reading a YA novel about magic and realms and pettiness amongst ‘friends’ when in walks the Zsoltster. He says to me,

“Can you clean the apartment tomorrow, because it’s really messy.”

And I erupted into a dragon, blowing a stream of burning fire, filling our bedroom with my rage, and then stormed out of bed into the other part of the apartment. Anxiety began pulsing all over and I was just-so-angry. SO-ANGRY.

This is the bit that kept me up last night. “It wasn’t a hot flash” says my brain, “it was a hot THRASH! High-five!” So at least a part of me finds that hilarious. Probably the part of me that also loves reading YA magic books.

I guess I should make it clear that my husband has been working his butt off these past few weeks. Like morning till midnight. We help each other out, right? So when he is crazy busy, I try to take over things and vice-versa.

Anyhow, I was doing my best, and it just ticked me off that it was pointed out that my best wasn’t good enough. Of course Zsolt would never actually feel that way – but I’m a hormone flashing woman, plus a writer, and therefore will, without doubt, read into all statements made about my housekeeping.

While my husband hid in the bedroom, I began throwing everything in the apartment into this large bin. In went my purse on the ground, in went the papers on the kitchen table, in went my new camera, in went the clothes on the sofa – everything went in. Even stuff I needed. It just all went in.

So that felt good. The apartment seem a bit more tidy, all the crap was now isolated in one place.

Then I went over to where the floor was sticky. Apparently my soup leaked on the floor. Not that the observer of this leak cleaned it up. So, continuing my anger, I got down on my knees and scrubbed that damn floor! Scrub, scrub, scrub!

All the while, I’m sweating like crazy having one hot flash after another. (or working out, this may also be the case.) It became quite late, and there was still that damn box of stuff. But first, I could no longer stand the site of all those stupid dishes piling up. Still pretty furious, I began washing those dishes – one after another, after another, till I’d washed about 1,000,000 utensils and maybe 20 different plates.

And then there was the bin of crap.

Sitting down at the now clean kitchen table, I sorted that crap (much of it not actually being crap, but very useful things) into different piles according to their ‘home’ within our apartment. Then, one pile after the other, I put it away. Finally, I filled out a survey for the OICC where I get my vitamin C, because it had been in that pile of crap, and had quietly weighing on my mind  all week. e.g. “when am I going to do that survey, already? Later. Later, later, later.”

By this point, exhaustion had really hit me. I was KNACKERED. It’s hard to be furious when you are knackered. And by this point the fury had left me. Instead I felt really damn satisfied.

And since that point, I’ve stayed pretty darn-tootin’ satisfied. The apartment is tidy. I like that. Life is better this way. And we are eating better. And I’m not as overwhelmed, for some reason.

Sometimes you just need to get incredibly angry. Or at least, I do.

Hot THRASH. Change of mind, that is hilarious. High-five, Catherine who wakes up at 3:00 AM and dictates blog posts. See? I kept my promise.