Ah, radio silence . . . or rather, blog silence. For the past little while I’ve taken a break from the blog. Not because the blog was overwhelming, but because I was overwhelmed. However, we’ve just returned from a pause out west. This fishing trip had been planned ages ago, and so I decided not to cancel – in fact, it’s probably for the best that I didn’t since one thing after another was beginning to grind me down. We needed the break.

Here’s the real, real, real truth: I am not good at this. I’m just plain terrible at it. And of course it will all work out somehow, but I don’t know how people do it – and I’m not just talking about the cancer stuff, though it’s the biggest challenge, but the life stuff too. The highs and lows and curve balls and backtracks and ambitions and workloads. I’m just feeling kinda garbage with all of it. I guess that’s why spas were invented, and tea with friends, and duvets, and hugs.

So that’s all I’ll say about it. It was quite surprising and knocked me off guard as it happened. I’d quite like to stop that from happening again, if I can see the signs ahead of time. 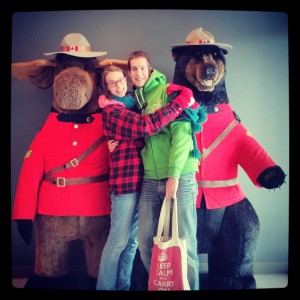 the moose and the bear

For the past several days Zsolt and I have been on a bear hunt. It started in Calgary and a drive with my friend out to this beautiful lake Kanananananananasksis. Or something like that. We’d packed our inflatable canoe with us, and were ready to sail except the winds and rain stopped us from heading out. So instead my lovely friend took us on a very slow drive through the back-country where we hoped to spot wildlife. It didn’t happen, however. Though apparently the next day they had to close that park because a grizzly was spotted eating a carcass.

From Calgary we took our rental car up to Banff. Banff is a National Park in Alberta, and it’s lovely J There’s a very touristy village with help wanted signs in all the windows – so if you are looking for a rocky mountain adventure, they have vacancies. However, no bears were spotted.

From Banff, we drove up to Jasper – a town embedded in my heart from trips as a child and a summer spent working for their tramway back in 2001. This is a far less commercial village, except for the souvenir shops all selling the exact same crap. We stayed here a couple days and drove from one waterfall to another, all the while going 30km/hour and looking for bears. Still nothing. But, we did find elk, thank goodness for that. 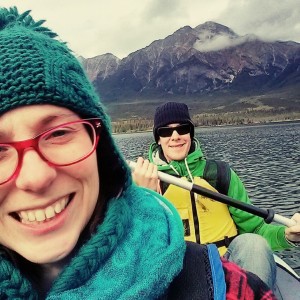 Here in Jasper I finally was able to canoe on Pyramid Lake, which had a been a day dream of mine way back in the chemoland days. Except instead of feeling that freedom and lightness I’d so craved, we were wrapped up in layers of warm clothing, praying it wouldn’t rain on us. There’s a strange niggle with this new diagnosis that I can’t shake off even in the best of moments. It’s just there looking at me. And whenever I look back at it, it sticks out its damn tongue.

To be honest, I’m a little exhausted lately – even on the trip I was exhausted – and it can largely be attributed to that tongue sticking-out, shoulder sitting, moment-spoiling little mental reminder I can’t seem to shake off. The way I see it, I’ve already lived 2 years with this bull shit cancer, and they were 2 of the sweetest years I could have asked for. Now that I know it’s there . . . why can I not get back to that sweet spot?

After Jasper – which involved a ridiculous canoe packing episode where we folded, jumped on, climbed over, sat upon and crushed our canoe into the suitcase – we went to Vancouver. In Vancouver we had one day of sunshine where Zsolt and I rode a two person bicycle. Now THAT was fun. 🙂 There’s no being distracted or getting teary when you’re trying to balance a bike between two people while watching the stunning scenery and taking in that ocean air. It still makes me smile. 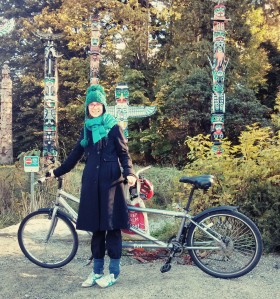 Following Vancouver, we met up with my parents and little brother (the real purpose of this trip) to go fishing. Okay, I didn’t fish. I went to cafes and had cups of green teas. But the guys went fishing with HUGE results. So even if we never saw a bear, at least he did witness a dinosaur fish.

And now we are back and the real world continues. We’ll see how this goes, and how I manage. One day at a time, eh.  Plus, now that I’m back, I get to enjoy piecing together the prizes and construction for the book. Tomorrow I’ll meet with Ian to talk covers, and I’ve already got an ISBN sorted. When I think of my book – like really think of it and imagine it – it fills me up so much with that splash of goodness and lightness . . . kinda like biking around Stanley Park on a bicycle built for two.

So here we go – moving forward into autumn and the upcoming new year. We will see what happens next.

P.S. Wendy Nielson has featured me on her blog this month as she shares stories of those faced with breast cancer.  Check it out, she’s done a lovely job with our interview. Also, It’s now breast cancer awareness month, and that is fine if not also kinda exhausting. There are places where awareness is hugely needed, and there are places where we could move beyond awarenss. Cancer is a tricky little bugger whether it’s impacting children, women, men, pets or anything. It’s heartbreaking as any other life-threatening illness is heartbreaking. And breast cancer is not what you think it is . . . it’s not six months of treatment and life moving forward. Okay, life moves forward, but for 1 in 3 women like myself, it’s also cancer moving away from the breast area and into other vital organs of the body. There is no cure, and treatment options are shit. So if you want to support a cause this month for BC, that’s wonderful. Please check before you buy pink, so that the money you give (whether you decide to fund research, emotional support, awareness of ‘ahem’ metastic breast cancer, or even better finding cures) actually goes toward those goals and not just people’s piggy banks. That’s all I say here today. Thanks!

Today I have an appointment at the fertility clinic. What this appointment is about, well – no one seems to know. 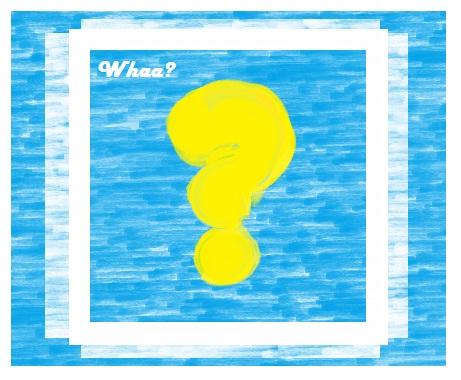 I don’t know. Zsolt doesn’t know. The nurses don’t know. But the appointment exists and since we didn’t cancel it properly all of three months ago when receiving notice of the booking, we’re going in.

I had tried to cancel this meeting. Calling up the breast care nurses we’d had a conversation about why this meeting was scheduled and had concluded it was a mistake. The nurse said she’d cancel it for me and I decided not to worry. That was three months ago.

Last Friday while having just received the dopy drug into my vein, the chemo nurse says, “So, I see you’ll be going to the Princess Ann on Monday.”

“Yes,” she replies. “Someone called for your notes yesterday. You have an appointment with the Fertility clinic.”

“What ?” And the world feels so heavy. “We cancelled that meeting.”

“Do I have to go?” Even my thoughts are getting heavy: have I done something wrong? Will this mistake get me in trouble?

The nurse now wishes aloud that she hadn’t mentioned the appointment because there I am drugged up trying to contemplate another unexpected twist. Thoughts of invitro fertilization and Zolodex are running through my head and I can’t help thinking, “why do they spring these things last minute?” When really, the appointment has been set for three months – regardless of my ignorance to that fact.

Anyhow, I generally think it’s rude to cancel without sufficient notice. Therefore we are going to this appointment with the doctor who is – as he once mentioned – extremely busy. People wait ages for an appointment, and we’ll be walking in saying something like: hey, how’s it going? Long time no see . . . why are we here?

This past chemo was the easiest session thus far. Why? Well, Zsolt and I have a few theories. 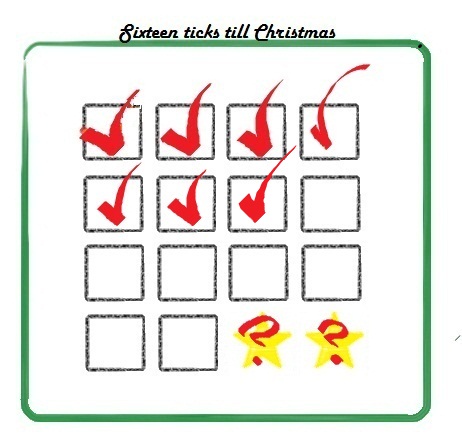 Theory one: Could they have reduced my dose? The doctor had mentioned something two weeks ago about a possible reduction in my dosage. I have mixed feelings on this, but better reduced dosage for one week than to get behind another treatment. Maybe this will give my blood the chance it needs to recover – even if it’s only a slight recovery. Anyhow, that is one theory. Next time we see the doctor we’ll ask if they changed something in the chemo plan.

This past treatment I was able to sit up on Friday and watch a little Channel 4od. Yesterday I went for a walk that lasted a good twenty minutes. Today we tidied the flat and did some groceries. I still get those waves of exhaustion and need to take breaks – after Saturday’s walk I crashed onto the bed. BUT just being able to do those things is such a drastic change. Could it be that the previous treatment is finally leaving my body?

Theory Three: Have I finally accepted my situation? Well, actually – will I ever accept my situation is a better question, though last Friday was a good switch in my mind. Thursday I’d gone in for my blood and felt that nervous tension, that same resentment for my situation. Then Friday morning Zsolt talked to me about how much he worries. Poor guy,  he started researching my chemo treatments, which led to him reading about stage 3 breast cancer, which got him onto reoccurrence topics and so on. This is why I avoid combining Google and key words searches for ‘breast cancer’. It’s just fucking depressing. Anyhow, he came to me with these worries and for a change it was my turn to comfort him.

“We’re going to be fine. We are fighting this cancer. We are doing everything we can. We will get through this.”

We are fighting. Chemotherapy is fighting. The idea clicked into my head, and that afternoon before leaving for treatment I didn’t punch out my fear of chemo; instead I punched to kill the fucking-fucking-fucking cancer that may still be in my body. It has no right to be here, and going to chemo is part of killing that cancer. And all throughout my treatment (walking into the ward, sitting in the chair, getting the dopy drug, waiting for the drips) I thought: I am killing this cancer. We are killing every last bit of this cancer.

I can’t promise to always be friends with chemotherapy; it’s a process that is draining and difficult. But for Zsolt and for myself – I will use it as my weapon.

So we fight, fight, and keep on fighting. Chemo is my weapon.